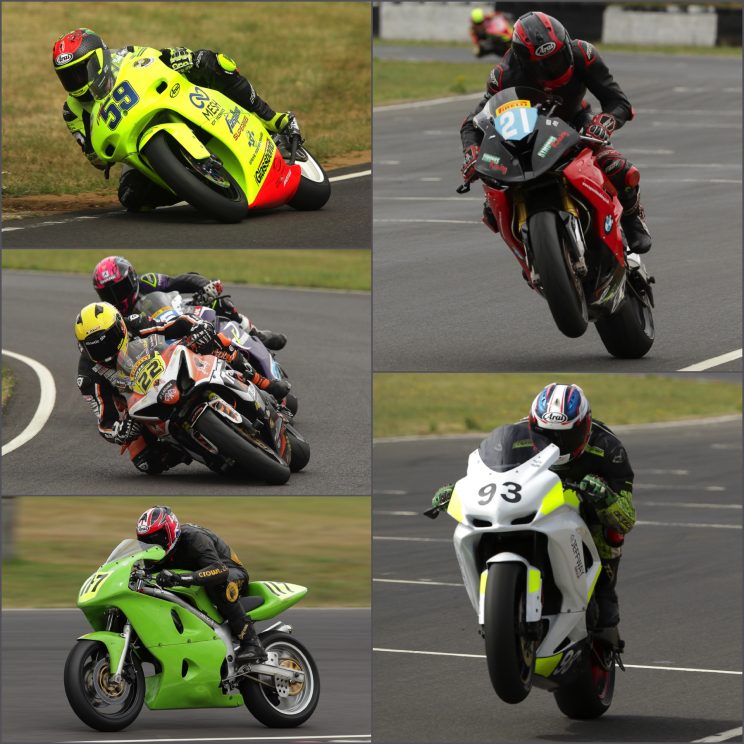 SYMONDS TAKES IT TO THE MAX
Symonds Racing BMW rider Max Symonds was unstoppable at the Castle Combe Grand National meeting held over the weekend of the 20th/21st August. After qualifying on pole for the King of Combe and second behind Aaron Ridewood in the Powerbikes, Symonds saw off each of his rivals to emerge victorious in all six races and bag the King of Combe trophy for the first time. One of Symonds closest challengers was Dale Thomas aboard a 600cc Suzuki. Returning after a lengthy break, Thomas showed he had lost little of his speed with pole and two wins in the 600s as well as chasing Symonds home in each of the King of Combe encounters to take home the silver medal. One of the rides of the day on Sunday came from National 250GP rider Bobby Varey. After fluffing the start and falling to the rear of the field, the brightly hued Yamaha set off on a charge. Varey caught leader ‘Tommy 2-Stroke’ Lawlor with less than two laps to go and battled past on the run to Quarry to seal a great win. words Stephen Carpenter EDP Photo News. 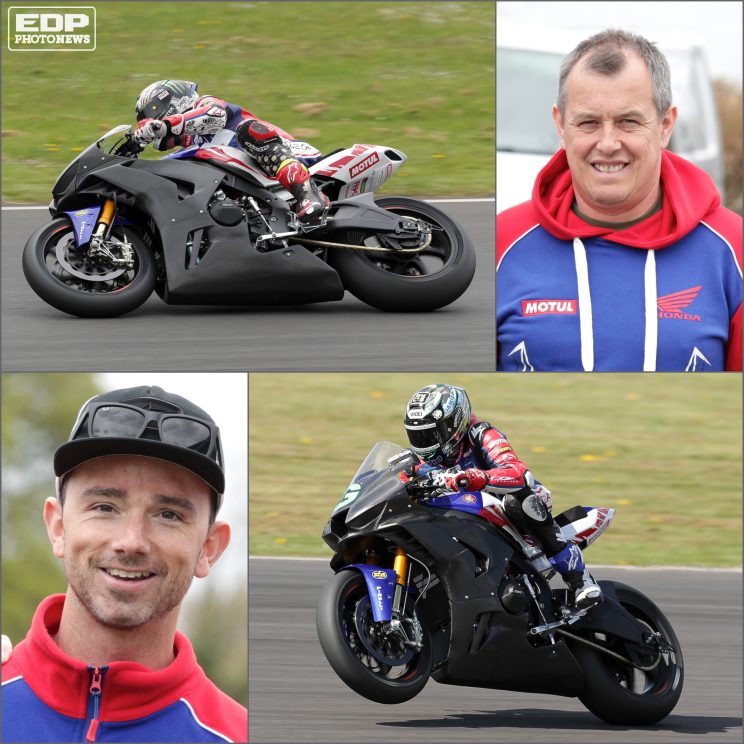 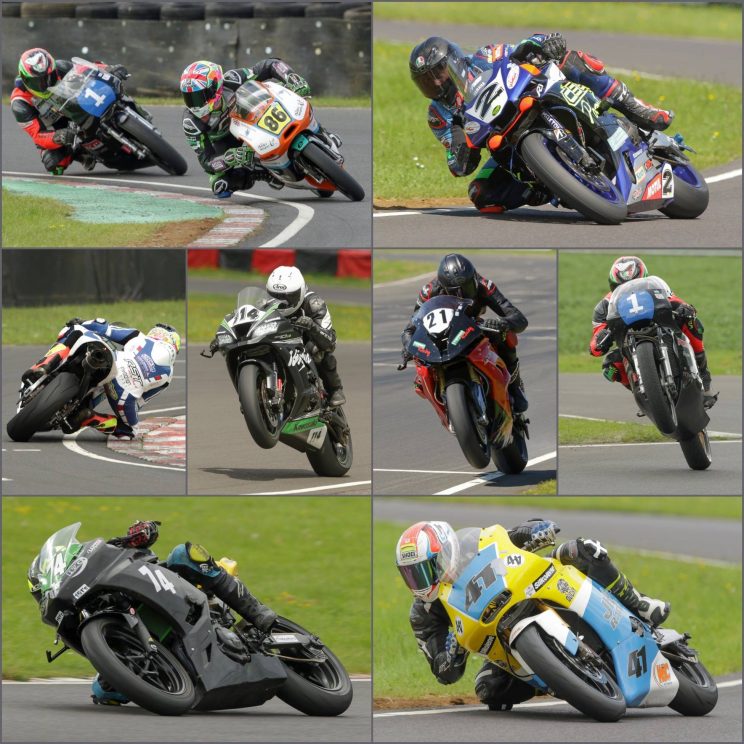 DAZZLING DAY RETAKES COMBE CROWN
Over the weekend of June 5th and 6th motorcycle racing returned to the high-speed Castle Combe circuit as the third meeting of NG Road Racing Club’s 2021 season took place. The limited number of spectators allowed to attend under current guidelines saw three-time ‘King of Combe’ winner Josh Day come back to the Wiltshire circuit to attempt to take his fourth title. Borrowing the Yamaha R1 with which he enjoyed so much success in the recent past, Day romped to pole position and wouldn’t be headed across the three Phoenix Open races to recapture the Rodney Gooch Trophy in style, points scored across the three races deciding the ’King of Combe’ winner. His form carried over into the Bluebell Lakes Powerbikes with Day taking all three wins there too as Max Symonds wrung the neck of his BMW in valiant pursuit. 2020 ‘King of Combe’ champion Daniel Cooper’s pace was too hot for the rest of his IMS 600 competitors as he flew to victory in each encounter, youngster Bradley Richman and Triumph mounted Owen Hunt running him closest. The little 600cc Honda also carried Cooper to the runner-up spot in the ‘King of Combe’ title race from Max Symonds. British GP2 rider Charlie Nesbitt wheeled out his KTM Moto 3 bike and was rewarded with three National 250 GP race wins as Gavin Mills and Steven Neate’s RS250 Hondas plus Phil Atkinson’s elderly TZ350 Yamaha kept him honest. In the concurrent 125 GP class, team-mates Ant Hodson and Tom Hayward fought hard all weekend with Hodson prevailing twice and Hayward taking the other. Phil Atkinson was also out in the GP Originals series and became embroiled in a fierce scrap for second position on Saturday involving Glen English, Atkinson, Daniel Walling, Nigel Palmer and Daniel Jackson, their squabbling allowed race winner Ant Hart to escape but the tables were turned on Sunday as Atkinson scorched to glory twice with his front wheel regularly pawing at the air. Other highlights among the NG classes included some feisty scraps in the Metzeler/DTR Streetstock 700/1300 and Pre-Injection 1300 bouts as the 600cc mounted Daniel Nelmes and Kurtis Butler took on the bigger 1000cc bikes of Jason Hill, Chris Oliver and Jon Wright with the top Pre-Injection Honda RC30 of Sam Neate getting involved too, Nelmes’ R6 Yamaha somehow emerging on top twice whilst Neate tasted victory on Sunday morning. Ben Harrison fizzed to six wins on his 400cc Kawasaki but was kept on his toes by Dan Harris aboard his SV650 Suzuki in the combined F400/Mini Twin races as regular F400 table-topper Tim Bradley was bested by youngster Finn Smart-Weeden’s Junior Supersport bike through Camp last time around on Sunday afternoon. Reigning Suzuki Bandit champion Harley Prebble took his Team Classic Suzuki supplied bike to three wins but was made to work hard for each by Ian Agnew, Gary Cutts, Lee Marks and Dave Crampton, local man Agnew receiving one of the ‘rider of the meeting’ awards for his efforts along with Finn Smart-Weeden and Daniel Nelmes.Words Stephen Carpenter EDP Photo News.

Please click view galleries, a selection of images from the weekend. 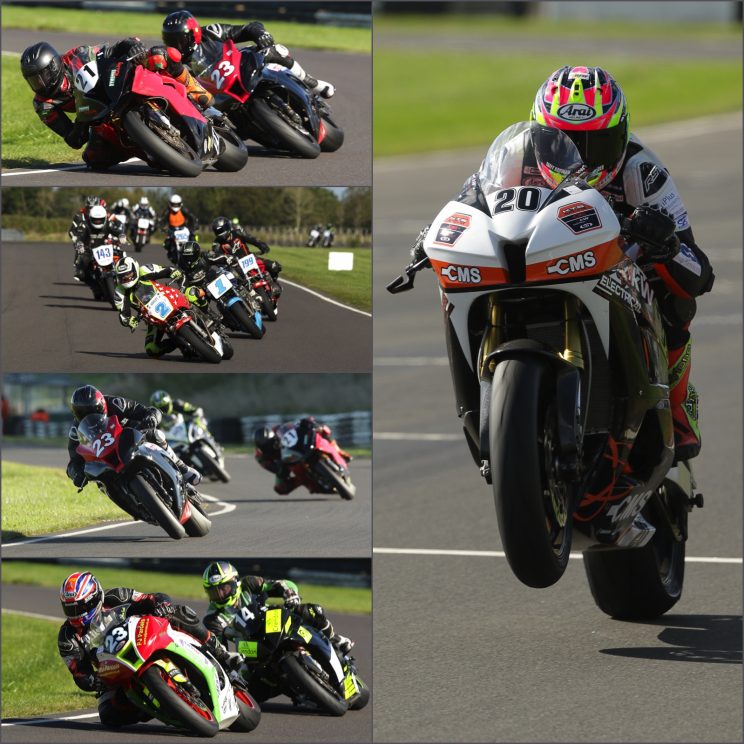 COOPER CROWNED KING OF COMBE
NG’s second and final meeting of a short 2020 season took place at the fast Castle Combe circuit in Wiltshire over the weekend of the 26th and 27th September in sunny weather but with a chilly breeze and the subsequent cold track temperatures caught out a number of riders at the Esses in particular. Wheeling out his 600cc Honda and taking a firm grip on the Phoenix Open races, for which the three races counted towards the ‘King of Combe’ title, and the IMS 600s saw Daniel Cooper setting pole position and sealing the win in all six races he contested. On Sunday morning he was made to work for the win with Preston’s Sean Montgomery on his 1000cc Kawasaki taking the fight to Cooper and leading the early stages before Cooper found a way past. It was a fruitful weekend for Montgomery in the Powerbikes bagging a second and a win before crossing the line first on the road after getting into a race three scrap with BMW mounted Max Symonds, who was crowned Phoenix Open champion over the weekend and Suzuki riding James Cox up from the rear of the grid but was slapped with a 10 seconds penalty for jumping the start dropping Monty to fifth but more importantly grabbing the 2020 Bluebell Lakes Powerbikes championship. The Dunlop ACU 250GP championship races saw pole sitter Charlie Nesbitt fall on the opening lap of Saturday’s race allowing the versatile Phil Atkinson to take the win on his elderly Yamaha TZ350 before doubling up on Sunday morning as Nesbitt charged up to second from the back on his KTM Moto3 bike before the duo duked it out in the afternoon with Nesbitt triumphant. In the Sound of Thunder races senior rider Paul Willis took Saturday’s encounter on the big RC8 KTM before a high speed accident at Folly on Sunday morning involving Mark Compton’s Ducati Panigale ended his weekend so True Heroes Racing’s Ben Falla took the restarted bout with Owen Hunt aboard a 675 Triumph taking the afternoon race. In the burgeoning Formula Prostocks competition Ducati 916 mounted Ant Hart won as he pleased on Saturday but an overnight trip down from Oulton Park for Nick Williamson proved worthwhile as he stormed though the field to win on Sunday morning from the back of the grid then had a great dice with Hart en route to the victory in the afternoon on his Honda VTR1000 SP1. Born from the Formula Prostocks the all action Motul FPR Suzuki Bandit Challenge had four riders in a tangle for the race wins with Peter Bardell managing to bag all three with Harley Prebble, James McHardy and James Newbould scrapping for the podium placings whilst Gary Cutts also took a third on Sunday afternoon. Among the smaller capacity classes Richie Welsh took three wins on his 400 Yamaha, two in the Open 500s and the final Formula 400 victory after long time leader Ben Harrison engaged a false neutral dropping him to second after taking out the first two wins from Welsh whilst in the Mini Twins Antony Lewis and William Holland took the top two placings in the first two combative races with Holland taking the third as Jordan Boyle split the pair. After a weekend of full grids and great racing the NG fraternity now faces an extended winter as the ongoing Coronavirus pandemic restrictions put paid to the planned final 2020 meeting at Pembrey on the 10th and 11th October. Report Stephen Carpenter EDP Photo News.