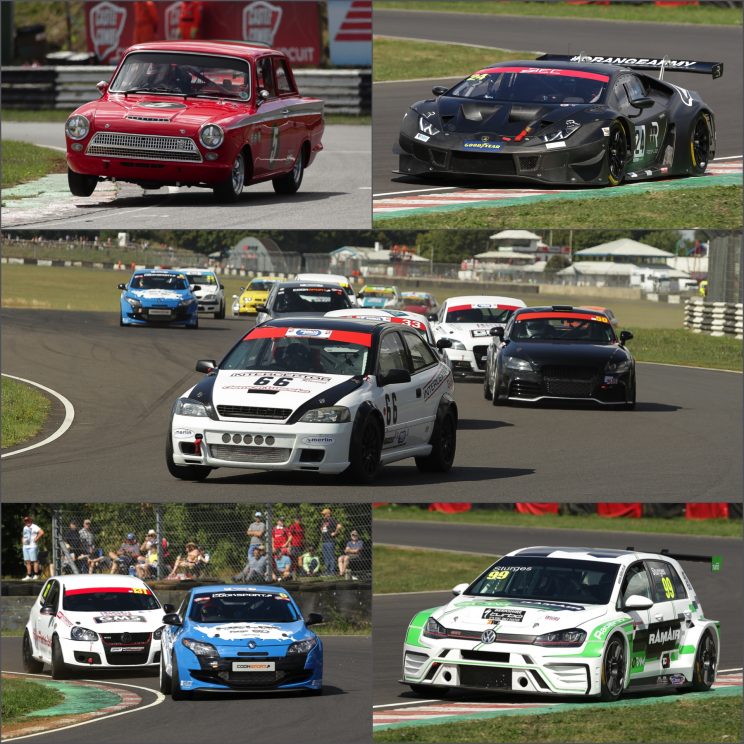 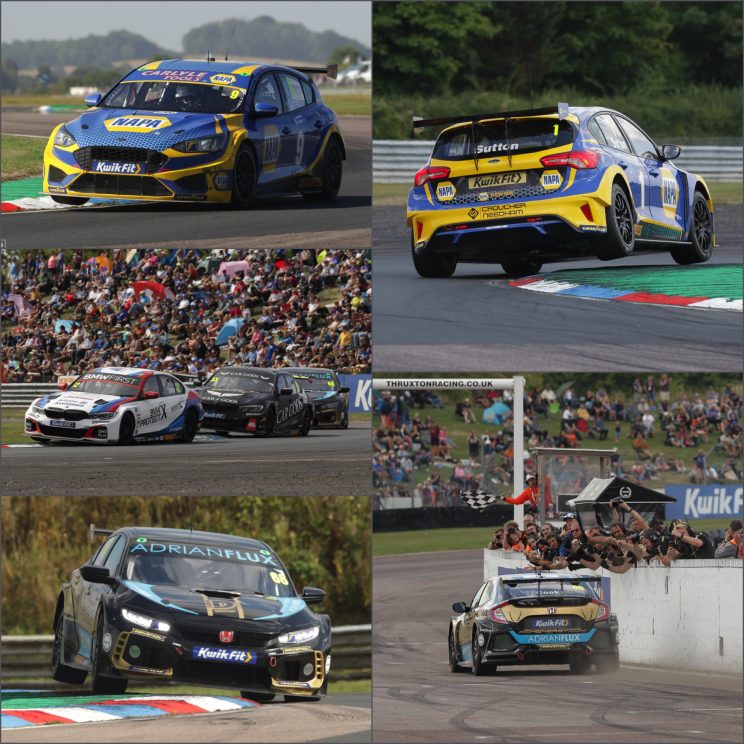 FORDS FEAST AT THRUXTON AS COOK SERVES UP RACE THREE

The Kwik Fit British Touring Car Championship paid its second visit of the 2022 season to the sweeping Thruxton circuit over the August bank holiday weekend for rounds 22, 23 and 24. Scoring his first pole position in a Ford Focus, Dan Cammish headed current Thruxton maestro Josh Cook by 0.017 seconds. Championship hopefuls Jake Hill and Ashley Sutton made up the second row whilst series leader Colin Turkington languished in 15th, two spots behind closest title rival Tom Ingram. Cammish held the lead at the start of race one whilst Cook came under fire from Sutton, Hill and Gordon Shedden at the Complex. Neither Cook or Sutton were willing to give in at Seagrave, the resulting contact sending Cook sideways and plummeting down the order. Shedden took advantage of Sutton’s loss of momentum to move ahead and the pair settled into second and third places behind Cammish, who had been gifted a big lead by the skirmishes. The Ford man managed the gap over the remainder of the 16 laps to take his first win for Napa Racing, Shedden coming home in second from Sutton and Hill. Championship chasers Ingram and Turkington scored with ninth and tenth place finishes as Cook salvaged three points for thirteenth but had eyes for so much more. Cammish again converted pole into the race lead at the start of race two whilst a great launch from teammate Sutton got him alongside Shedden for second, making the place his own at the Complex. Just behind, Rory Butcher had a run at Jake Hill for fourth but Hill bravely held on around the outside of Noble. Sutton started to pressurise Cammish for the lead on lap two, setting the fastest lap in the process, but Cammish clung on and soon stretched out a small margin until, on lap 13, he was instructed to cede the win to title contender Sutton, pulling aside at Allard. Shedden took his second podium finish of the day with third and Cook regained more of his lost race one positions with eighth. An all-WSR BMW front row formed up for race three, Stephen Jelley and Turkington benefitting from the reversed grid draw which saw ball number 11 drawn, Michael Crees and Cook made up the second row with Cook looking to grab a top result after his race one contact. The two BMs led the way off the line but Cook was in determined mood, outdragging Crees when the lights went out before usurping Turkington for second at Village and then taking a good look at Jelley’s lead into the Club Chicane. Cook made the move stick the next time round and set off towards his third victory at the circuit this year. Turkington soon passed his teammate Jelley for second, which is how they finished. Jelley was reeled in by the squabbling pair Rory Butcher and Sutton in the closing laps but held on, Sutton having charged through from eleventh on the grid. Turkington now leads the points table by six points from Sutton as the championship heads to Silverstone for rounds 25, 26 and 27 on the 24th/25th September. words and Pics Stephen Carpenter EDP Photo News. 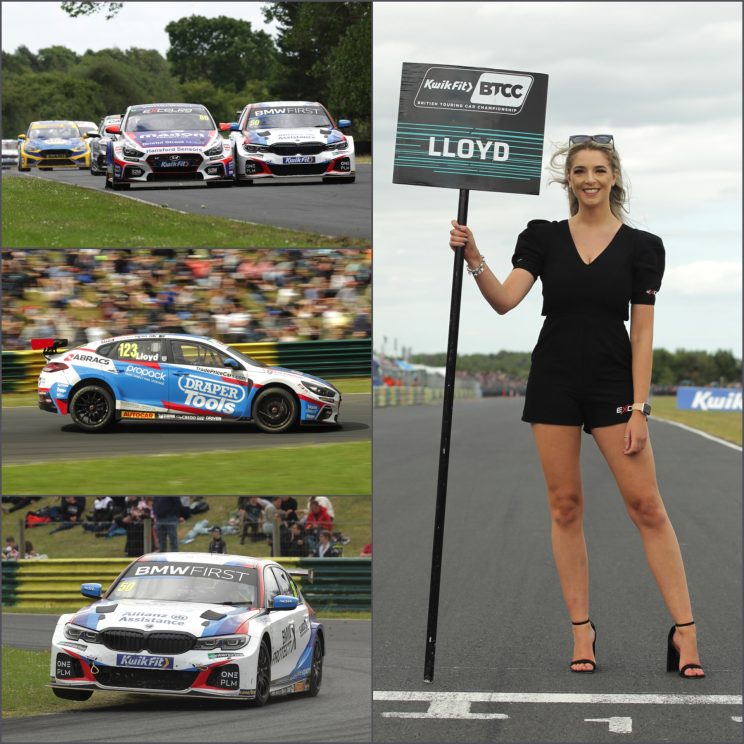 LLOYD’S DREAM DOUBLE DELIGHT
The Kwik Fit British Touring Car Championship made the journey up the A1 to Croft, near Darlington, over the weekend of the 25th/26th June for rounds 13, 14 and 15 of the 2022 season. The venue has traditionally favoured the rear-wheel-drive cars and that tradition was maintained as the WSR BMW of Colin Turkington sped to pole position by 0.027 seconds from the Team Dynamics Honda Civic of Daniel Rowbottom. Making up the second row were Excelr8 Hyundai i30 pairing Daniel Lloyd and Tom Ingram as 0.076 seconds covered the top four, a remarkable turnaround for Turkington and Lloyd after their car-wrecking incident at Oulton Park just a couple of weeks ago. Meanwhile, championship leader Josh Cook languished down in 20th position, bemoaning a lack of straightline speed. As expected, Turkington held the lead off the line of race one whilst a great getaway from Lloyd placed him second into the first corner. The BMW’s vulnerability on cold tyres showed as Lloyd pounced on Turkington at Tower for the first time, challenging around the outside then cutting inside to make the move stick on the run to the Jim Clark Esses. Lloyd survived two safety car restarts and withstood huge pressure from Turkington on the last lap to take a fairytale victory. Rowbottom completed the podium after resisting multiple attacks from Ingram on the second restart. Cook salvaged a point with 15th but Ingram cut his championship lead to just two points. The reduction of Hybrid usage for Lloyd made little difference to the Yorkshireman in race two as another peach of a start saw him lead the pack away. Lloyd’s dream day continued as he held the lead throughout to grab the win despite intense scrutiny from teammate Ingram and Turkington. Ingram, having jumped Rowbottom at the start, passed the BMW on the opening lap through the Jim Clark Esses, striking before Turkington’s tyres came up to temperature. Cook gained four spots from his grid position to come home in 11th but lost the championship lead to Ingram. The draw for race three saw ball number 12 pulled out of the bag so Gordon Shedden was handed pole position for the last race of the day with Cook completing the front row, Stephen Jelley and Tom Chilton making up row two. The front row starting Hondas held off the BMW of Jelley into Clervaux with Shedden ahead, the Team Dynamics man gapping the field to win his 52nd BTCC race by 2.5 seconds and cap his recovery from a race one DNF. Cook seeing off a train of cars for second ahead of Rory Butcher, Jelley, Jake Hill, Turkington and Ingram. Ingram leads the championship by 3 points from Cook heading to Knockhill after the championship’s summer break on the 30th/31st July.Words and Pics Stephen Carpenter EDP Photo News. 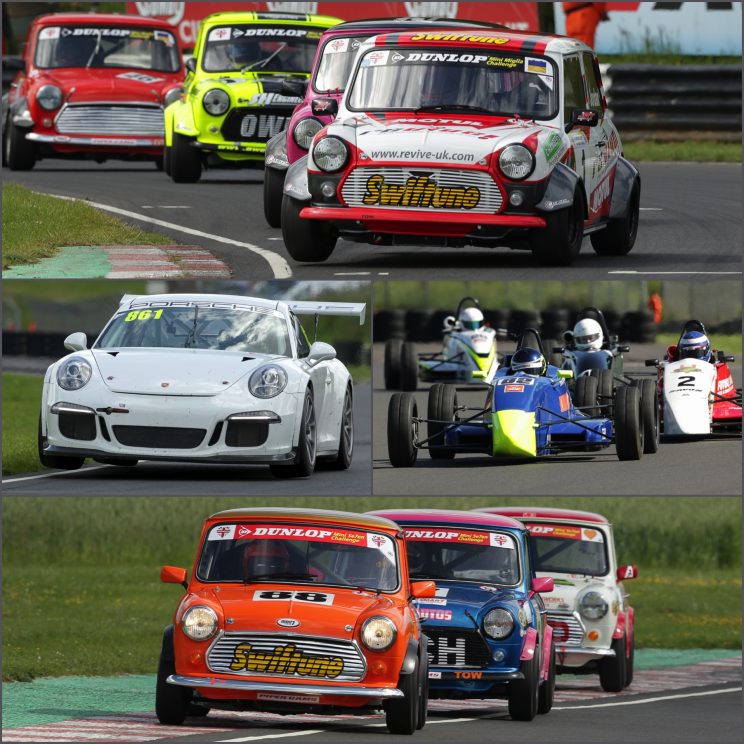 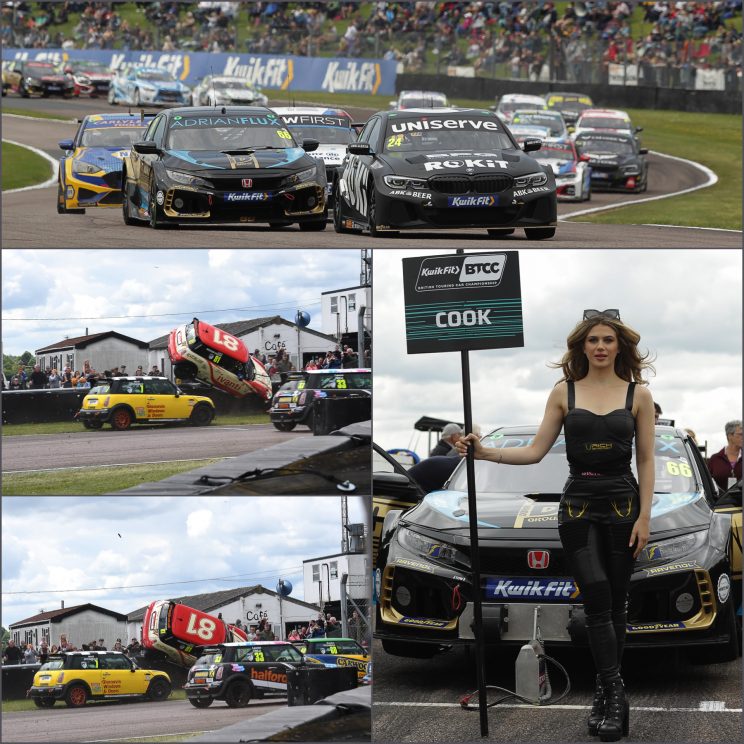 A WINNING RECIPE FOR COOK

The Kwik Fit British Touring Car Championship made its first of two visits in 2022 to the high-speed Thruxton circuit over the weekend of the 28th/29th May. Bath racer Josh Cook hustled his BTC Racing prepared Honda Civic to pole position from the BMW 330e of Jake Hill, with the Ford Focus of Dan Cammish starting from third – 0.081 seconds covering the trio. The rear-wheel-drive traction advantage off the line from his BMW allowed Hill to edge ahead of Cook on the run to the Complex at the start of race one but Cook muscled past when they got there and wasn’t to be headed for the remainder of the 16 laps, Hill keeping him honest to finish 0.9 seconds behind. Race two followed a similar pattern with Hill again outdragging Cook when the lights went out but this time Hill’s grasp of the lead lasted until the Club Chicane when Cook hung it out around the outside to grab back a lead he wasn’t to lose, heading Hill home by a narrow 0.487 seconds. The reversed grid draw for race three saw Cook starting from seventh, his BTC Racing teammate Jason Plato sat on pole alongside the Ciceley BMW of Adam Morgan. Plato slipped back at the start as a pair of BMWs headed the field, Morgan resisting race-long pressure from 4-time BTCC champion Colin Turkington to take the win by 0.599 seconds. Third in all three races was reigning champion Ashley Sutton aboard a Ford Focus, who finished right with the lead pair in race three, his consistent scoring moving him up to second in the championship table behind new leader Cook – who has now won four of the last six races. The series moves on to Oulton Park on the 11th/12th June and returns to Thruxton on the 27/28th August.Words and Pics Stephen Carpenter EDP Photo News. 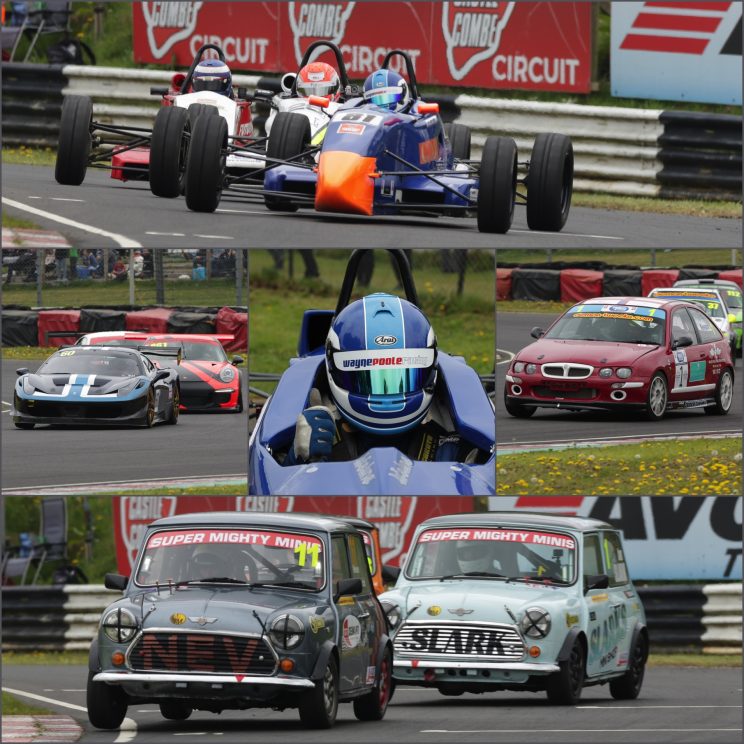 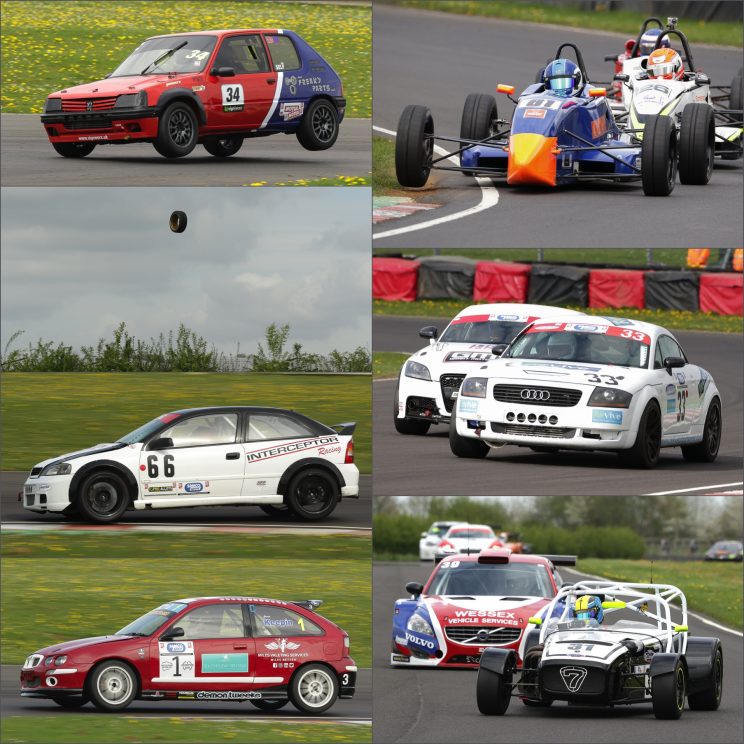 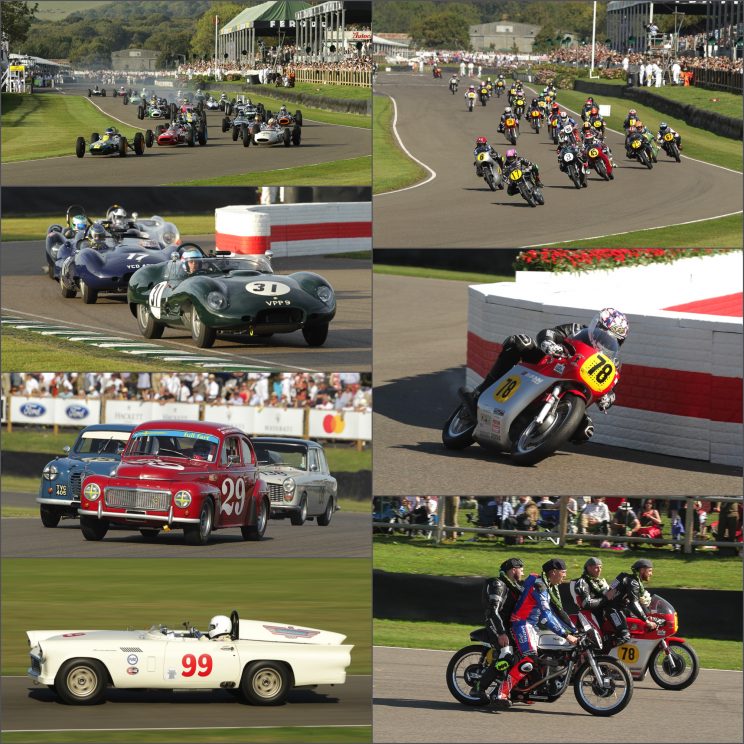 The 22nd Goodwood Revival Meeting took place in superb late summer weather over the weekend of the 13th – 15th September recreating the ambience of the 1950s and 1960s where period dress is actively encouraged with many displays and fine detail touches making the event feel like a real step back in time. The former RAF Westhampnett airfield opened its gates for motor racing in 1948 and for the next eighteen years the high speed circuit played host to many of the sports more famous and infamous moments such as Aston Martin’s 1959 RAC TT victory after a pit lane fire with which they won the world championship and Sir Stirling Moss’ horrific accident in 1962, parades to commemorate Aston’s win and Sir Stirling’s upcoming 90th birthday were held over the weekend along with the Mini’s 60th anniversary and also a tribute to the Cooper Car Company which saw Sir Jackie Stewart take the wheel of his 1964 Cooper T72 formula three car. After the last competitive meeting in August 1966 racing stopped until in 1998 the then Earl of March decided to restore the circuit to its former glory recreating the era of his grandfather the 9th Duke of Richmond, the brainchild behind the circuit, and the Revival was born with the first hugely popular meeting taking place 50 years to the day from the very first event in 1948 and is now one of the jewels in the crown of the historic racing scene.words Stephen Carpenter EDP Photo News.facebook.com/edpphotonews 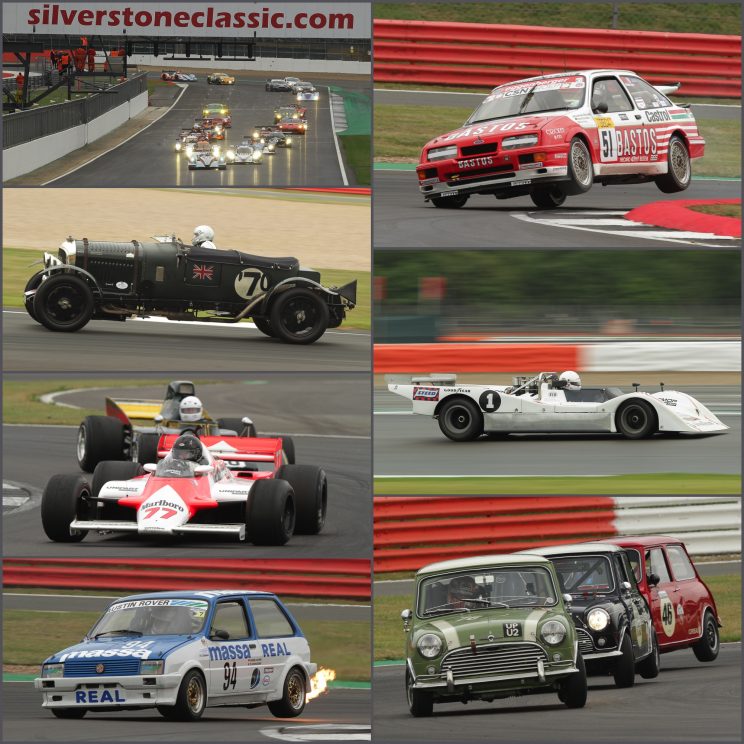 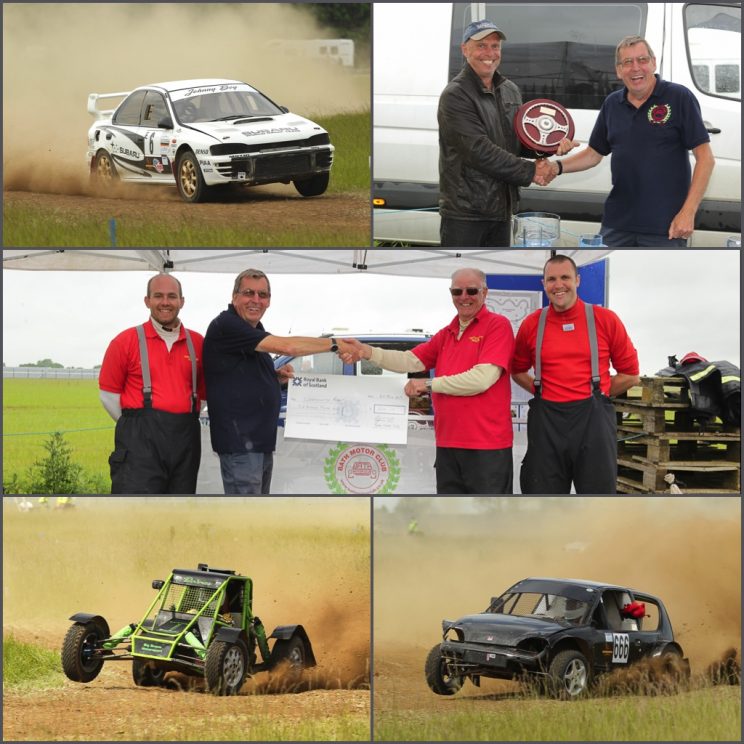 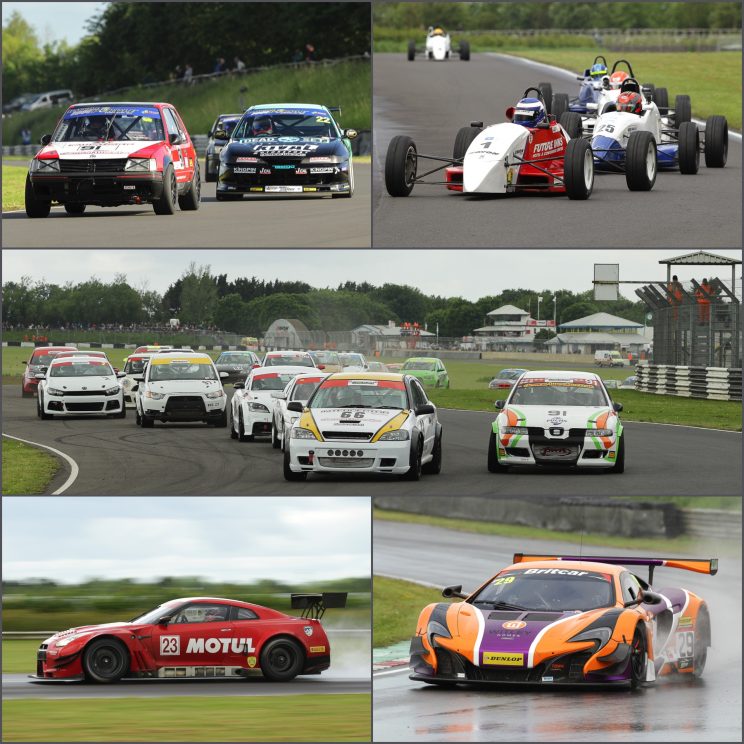 Double win for Luke Cooper in the CC FF1600 Championship races he also picked up Driver of the Day. 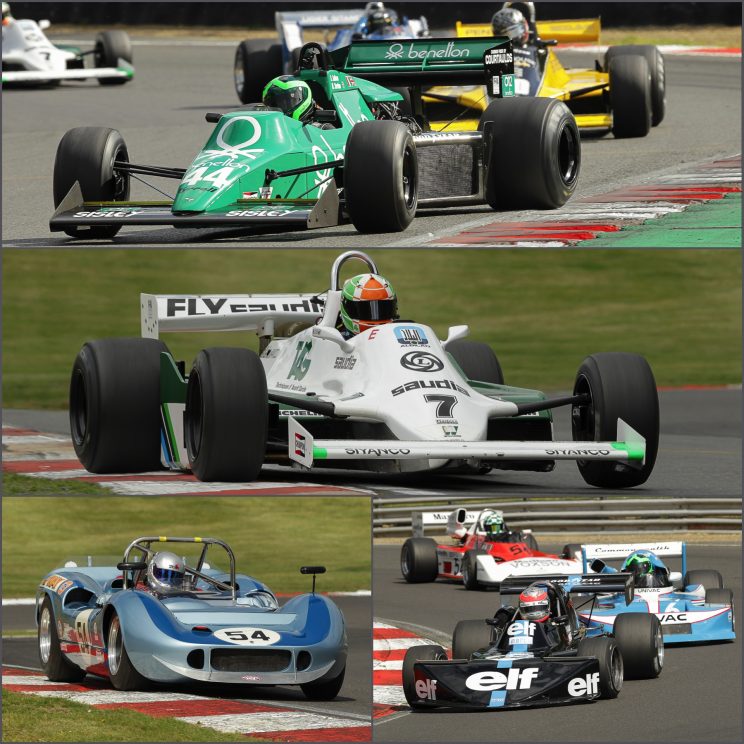 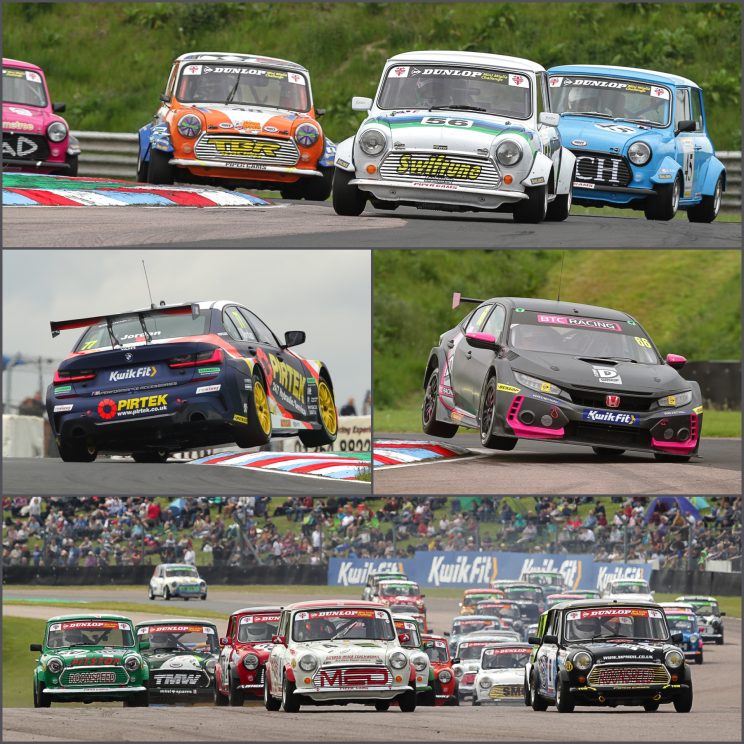 JUBILANT JORDAN AT THE DOUBLE AS THRUXTON COOKS UP A THRILLER
BMW Pirtek Racing’s Andrew Jordan took two wins as the Kwik Fit BTCC made its first of two visits to Thruxton in 2019 over the weekend of the 18th and 19th May. Starting from the second row in a freshly straightened BMW 3 Series after his heavy Donington Park accident Jordan leapt up to 2nd at the start of race 1 as top qualifier Sam Tordoff converted pole into the race lead which he held on to until the 13th lap when an electrical issue with his Honda Civic cost Tordoff his power steering making him run wide through Church allowing Jordan to tow past on the run to the Club Chicane and take the win with Tordoff holding on to 2nd from Dan Cammish in 3rd. A great start to race 2 saw Jordan take the lead from the start, a lead he wouldn’t relinquish leading home West Surrey Racing team mate Colin Turkington with Honda’s Cammish again completing the podium. Race 3 was drawn with the top 11 finishers in race 2 to be reversed which put championship leader coming into the weekend Ashley Sutton on pole with Bath’s Josh Cook sharing the front row. With spots of rain starting to fall Sutton held the lead through Allard but Cook was able to draw alongside on the run to the Complex taking the lead on the inside and controlling the race thereafter to take the flag surviving two safety car periods on the way. New joint championship leader Rory Butcher took second with Sutton in third. Ably supporting the BTCC in a one-off appearance this weekend were the Mini Se7en and Mini Miglia Challenges with four epic slipstreaming battles making the crowd cheer seeing Darren Thomas take both Mini Se7en victories as Chris Morgan and Nick Padmore split the wins in the Mini Miglias. The BTCC now moves to Croft in North Yorkshire over the weekend of the 15th and 16th June: Words Stephen EDP