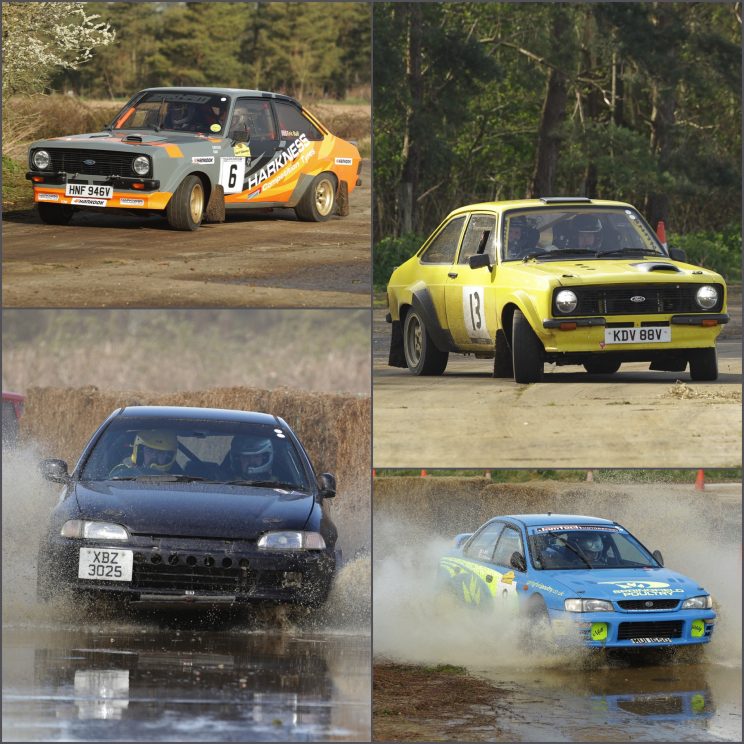 Neil Weaver and James Bailey took a narrow five-second victory of Cheltenham Motor Club’s Get It Sideways rally in their 2.5 litre Ford Escort Mk2, held on Saturday 2nd April at a cold and slippery Down Ampney. Taking the runner up spot on the final stage by one second was the impressive Honda Civic of Paul Morgan/Sam Stafford from the Millington powered Mk2 Escort of Steve Harkness/Paul Sanders in third. An overnight frost made for slippy going during the opening stages at the former RAF airfield and it was Andy Corner/Ade Camp who threw their Peugeot 205 into an early lead. The greasy conditions were allowing some lower-powered machinery to climb high up the leaderboard with the Peugeot 205 of Steve Davies/Lucy Wilding, the Citroen Saxo of Joe Piggott/Ben Williams, John Petrie/Heather Phelps’ Peugeot 106 and Martin Lasper/Rhys Edwards’ Vauxhall Nova, as well as the Morgan/Stafford Civic, all featuring in the top ten after SS2. As the springtime sun dried the stages so the more powerful cars were able to work their way up the leaderboard and after SS5 Corner/Camp held a twenty five-second lead from the Harkness/Sanders Escort, the Ford nine seconds ahead of 2019 rally winners’ Wayne Lloyd/William Lloyd in third – who were two seconds ahead of a charging Weaver/Bailey. Drama followed on SS6 as a broken gear linkage for leaders’ Corner/Camp saw them tumble down the leaderboard, this promoted Harkness/Sanders to the lead by seven seconds from Weaver/Bailey. The two Escorts swapped positions after SS7 and Weaver/Bailey extended their margin to ten seconds after SS8, the Lloyds were still third but had the Civic of Morgan/Stafford a solitary second behind. A rain shower before SS9 placed traction at a premium for the high-powered Escorts in the top three and into the last stage Weaver/Bailey led by four seconds with Harkness/Sanders and Morgan/Stafford tied on time behind, the giant-killing Civic having taken nine seconds from the rally leaders in SS9 and overhauling the Lloyd pair’s Escort for third. The tenth and final stage was no less action-packed as the three-way fight for the win came to its head, Weaver/Bailey suffering an overshoot at a hairpin and Morgan/Stafford sliding wide approaching the mid-stage water and catching a later-starting crew on their second lap, the Civic pair were still able to wrest the runner up position from Harkness/Sanders by a second and Weaver/Bailey held on to triumph by five seconds. Taking fourth was the Lloyd duo’s Escort and recovering to fifth were early leaders’ Corner/Camp. Taking the class E win for 4WD cars, which don’t count towards the overall result, was the Subaru Impreza of Nigel Mee/John Fellowes in a time theoretically good enough for the rally win. The organising club worked hard to fit in the scheduled ten stages and were rewarded with a fiercely competitive rally as the conditions proved a great leveller. words Stephen Carpenter EDP Photo News. 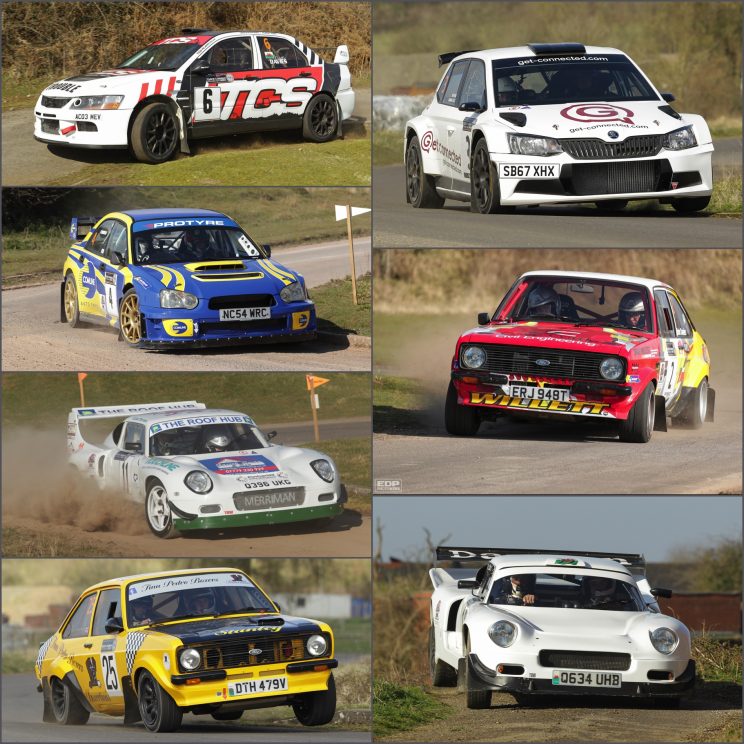 COLE CONQUERS CAERWENT
The Skoda Fabia R5 crew of Damian Cole/Ian Davis held off a stern challenge from the rapid Ford Escort Mk2 of Dave Willett/John Davies to win the Marshall & Hicks Print Ltd Tour of Caerwent on Sunday 27th March, organised by Forresters Car Club. In third came the Darrian T90 GTR of Wayne Jones/Jonathan Davies, the pair had led after the opening stage before being overhauled by the squabbling Skoda and Escort. An SS1 overshoot proved costly to Willett/Davies as they lost ten seconds to Cole/Davis but the Escort crew slashed the gap to a single second after SS2. The two crews traded seconds over the following three stages with Cole/Davis holding a slender 5-second advantage going into the sixth and final stage, the Skoda pair going 6 seconds faster than Willett/Davies to give the Welsh pair a winning margin of eleven seconds after a competitive day’s sport in the dry and sunny Caerwent Training Area. The rally was the first to be run in the challenging venue since September 2019, due to the pandemic, and the next event will be the Patriot Stages on the 25th September. Words Stephen Carpenter EDP Photo News. 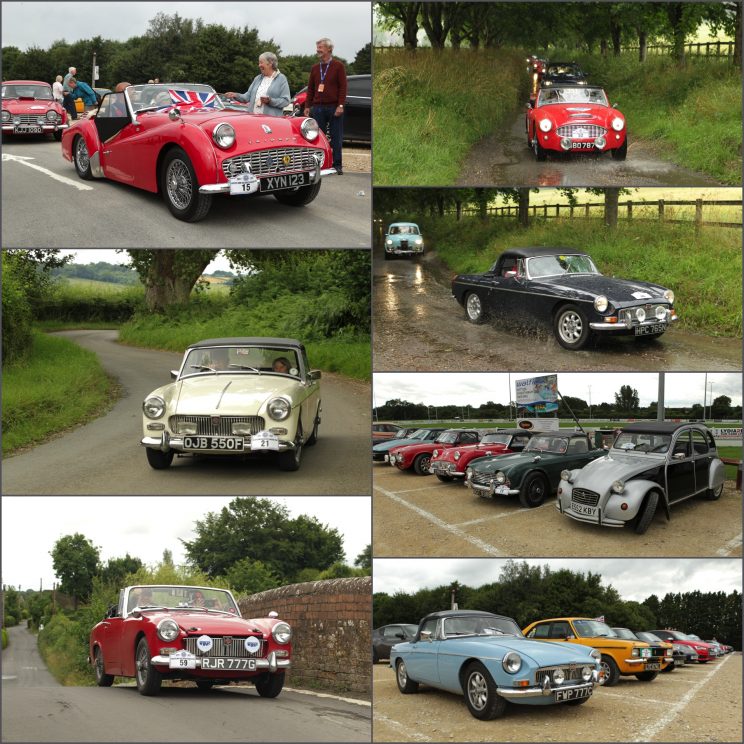 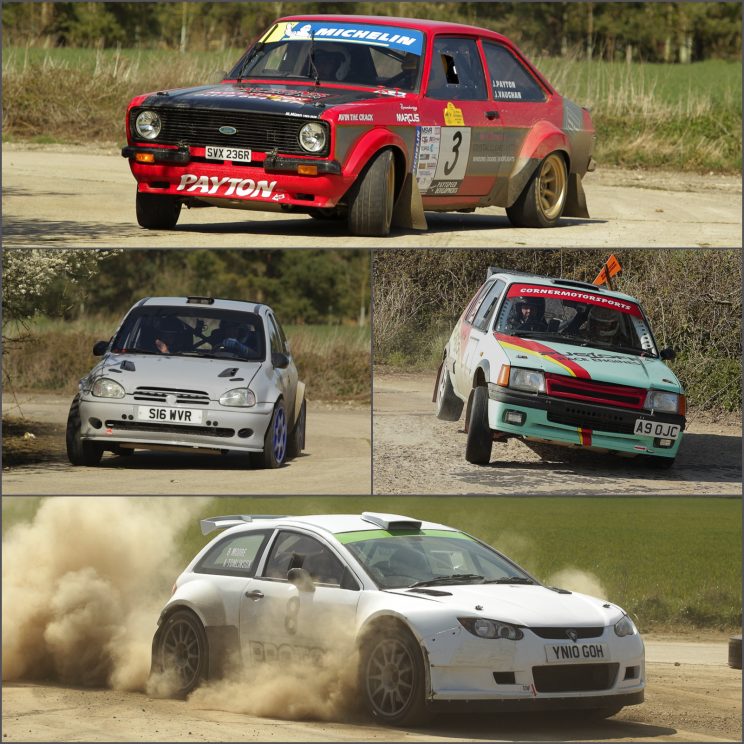 PACEY PAYTON PICKS UP THE PRIZES
Ford Escort Mk2 crew Josh Payton/Jamie Vaughan sped to victory by 28 seconds at the completion of the Get It Sideways rally held on the concrete roads of the former RAF airfield at Down Ampney on Saturday 17th April. With multiple measures in place to run a Covid-safe event, organisers Cheltenham Motor Club produced an action-packed schedule of ten stages for the crews to tackle but three stage-stopping incidents saw this reduced to nine in the end as an impeccably observed minute’s silence to mark the passing of HRH Prince Phillip was also factored in. Payton/Vaughan set their stall out early by setting the fastest 2wd time on SS1 to take the early lead as the three 4wd cars ahead didn’t count towards the overall results and when they fell by the wayside so Payton/Vaughan became de facto rally leaders on SS4 setting 5 fastest stage times on their way to the win, the pair surviving a scare on SS7 with a spin which brought the chasing Vauxhall Corsa S1600 of the committed Neil Weaver/James Bailey on to equal terms before scorching times on SS8 and SS9 moved the Escort crew 28 seconds clear of the Vauxhall. A rapid run through the afternoon stages moved the spectacularly driven Peugeot 205 of Andy Corner/Ade Camp up to third, seven seconds behind Weaver/Bailey. Three Mk2 Ford Escorts filled the next spots as the 2.5 litre cars of Stefan Davies/Dan Petrie and Tomas Davies/Elgan Davies sandwiched the 2 litre example of Steve Harkness/Wayne ‘Eric’ Ball and in a giant-killing seventh overall came the 1400cc MG ZR of Richard Jordan/Dan Evans. Winner of Class E for 4wd cars was the S2000 Proton Satria Neo of Ben Moore/Andy Tomlinson and top Historic crew were Rex Ireland/Adrian Scadding’s Ford Escort Mk2 at the end of a warm, sunny and dusty day.Report Stephen Carpenter EDP. 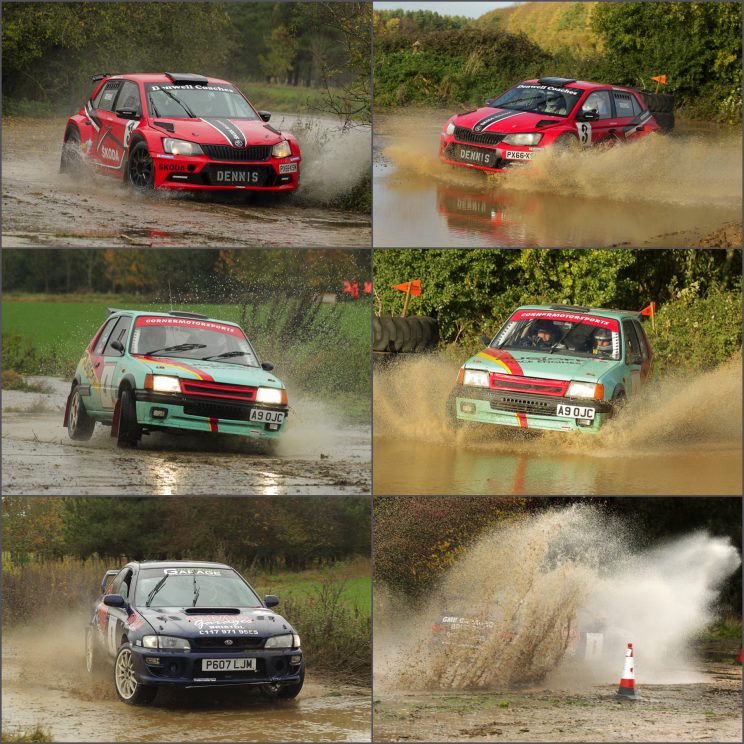 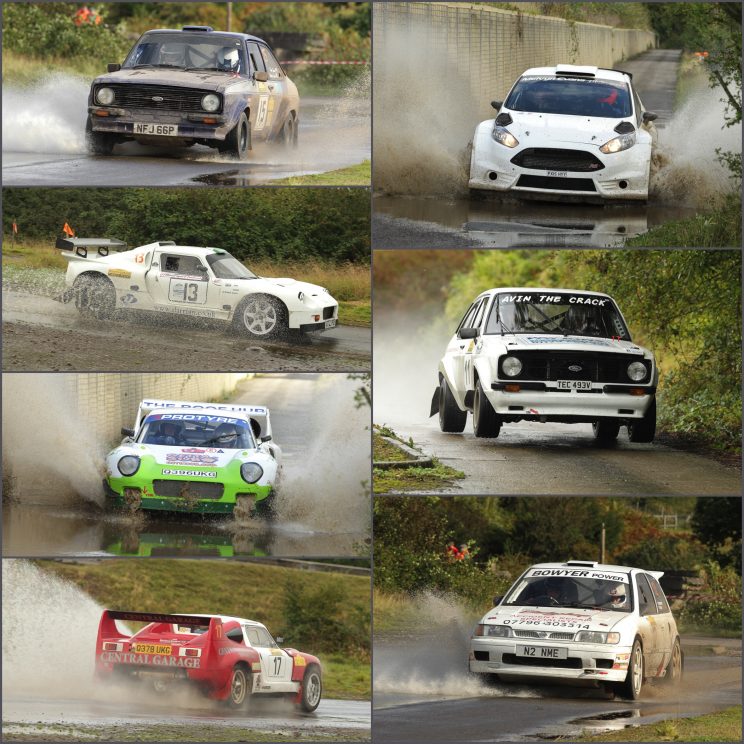 SELF SPLASHES TO VICTORY AT SODDEN CAERWENT

Ford Fiesta R5 mounted James Self/Ian Davis followed up their Midsummer Caerwent rally win in June with another at the Patriot Stages held on Sunday 29th September in weather much less clement than three months earlier… The pair didn’t have everything their own way as firstly multiple venue winners Dave Willett/John Davies in their Mk2 Escort set a time some 25 seconds quicker than the next crew on SS1 to lead despite heavy overnight rain leaving treacherous conditions with standing water in many places however mechanical gremlins meant retirement quickly followed on SS2 putting Self/Davis at the top of the pile as another cloudburst dampened the roads but Mark Jasper/Don Whyatt were unfazed by that to go fastest on SS3 in their 2.5 litre Mk2 Escort to tie with Self/Davis at the front but fuel issues on SS4 saw the end of Jasper/Whyatt’s run leaving the way clear for Self/Davis to set fastest time on the remaining three stages taking the victory by 59 seconds from Ford Escort Mk2 crew Josh Payton/Jamie Vaughan with the Nissan Sunny ‘Kit Car’ of Carl O’Grady/Dylan Fowler Bishop a further 1 minute 48 seconds back in third.words Stephen Carpenter EDP. 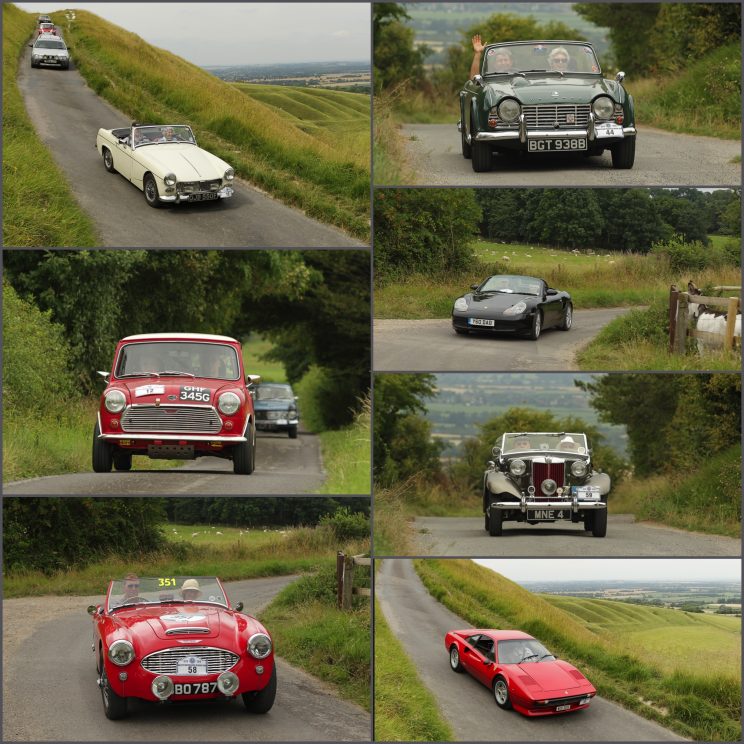 The Forresters Car Club organised Acorn Travel Midsummer Caerwent rally took place on Sunday 16th June in the demanding Caerwent Military Training Area. Before proceedings got underway a minute’s silence was observed for long time club member John Bird who sadly passed away in the build up to the event, diolch John. Top seed and multiple winners in the venue Dave Willett/John Davies were quickest away to set fastest time on SS1 in their Ford Escort Mk2 by a solitary second from the Ford Fiesta R5 of James Self/Ian Davis as Thomas Cooper/Sarah Edwards’ Mitsubishi Lancer Evo IX slotted into third. The top two were reversed after SS2 with Self/Davis taking four seconds from Willett/Davis to lead by three seconds heading into SS3 when a heavy rain shower struck whilst the leading crews were tackling the stage, Self/Davis adding another ten seconds to their lead as their Fiesta R5’s superior 4wd traction told in the wet conditions. Willett/Davies hit back on SS4 taking back seven seconds to more than halve the gap to Self/Davis but alas the fight didn’t go the distance after a reported electrical issue with their Mk2 Escort sidelined Willett/Davies on SS5 leaving Self/Davis clear to take the victory after six challenging stages by 1 minute 55 seconds from the hard charging Marcus Pagett/Rhys Stoneman’s Nissan Micra ‘Kit Car’ with the Darrian T90 of Richard Merriman/Kath Curzon a further 32 seconds back in third. Seventeen Junior crews started the event in their 1000cc machines and after the six special stages Elliot Payne/Carl Williamson couldn’t be split on time from the similar Citroen C1 of Rob Wilson/Martin Haggett but a time four seconds faster on SS1 handed the victory spoils to Payne/Williamson. Completing an all Citroen C1 mounted top 3 were Ioan Lloyd/Jonathan Jackson 35 seconds down on the front two whose pace would have seen them finish in 22nd overall in the ‘senior’ event. The third and final event of 2019 in the testing venue will be the Raintite Coated Metal & Curzon Wealth Management Patriot Stages to be held on Sunday 29th September.Words Stephen EDP

LLOYDS FINALLY BANK A WIN AT DOWN AMPNEY
Welsh crew Wayne Lloyd/Will Lloyd took the win aboard their Ford Escort Mk2 after many years of trying on the Cheltenham Motor Club organised Get It Sideways Stages Rally held on the concrete roads of the former RAF Down Ampney on Saturday 6th April. Topping the timesheets on 8 of the 10 stages Lloyd/Lloyd surged to a winning margin of 28 seconds from the Davrian Dragon Evo of Rick Neale/Edward Gamble with the top 3 completed by the 1600cc Vauxhall Nova of Sam Davies/Matt Lloyd although on times the class E winning Subaru Impreza of Nigel Mee/John Fellowes would have taken third spot by 2 seconds had 4wd cars counted towards the overall results on a day which cold and slippery conditions left grip at a premium in the early stages before giving way to
brighter weather and dustier roads later on for the 66 crews which started the event. Words Stephen EDP 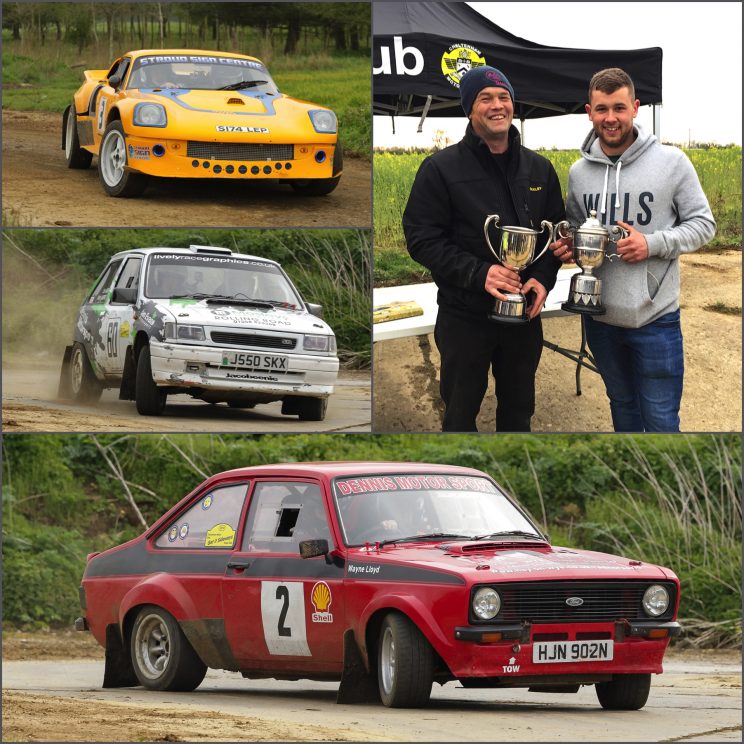 A DRIVING LESSON FROM CARR IN CAERWENT
Driving instructor Kev Carr with navigator Chris Pippen guided their Ford Escort Mk2 to the victory of the Marshall & Hicks Print Ltd Tour of Caerwent held on the 24th March in the extensive Caerwent Military Training complex organised by Forresters Car Club. Fastest out of the blocks on SS1 were Ford Fiesta R5 crew James Self/Ian Davis who tied on time with Llyr Jones/Emma Louise Todd’s Mk2 Escort with Carr/Pippen down in 7th 9 seconds from the front but a reshuffle on SS2 saw northern visitors Mark Jasper/Don Whyatt in another Mk2 Escort move into the lead with Carr/Pippen racing up to second having topped the times and the 2 litre Nissan Micra ‘Kit Car’ of Marcus Pagett/Rhys Stoneman popping into third. Carr/Pippen stamped their authority on the event thereafter taking the lead on SS3 with another fastest time then doing the same on SS4 and SS5 before a controlled run through the final stage saw them take the win by 25 seconds from the Self/Davis Fiesta and the Mitsubishi Lancer Evo 9 of Phil Turner/Simon Anthony in third after an ever changing battle for the podium positions which saw second to sixth covered by a mere 39 seconds. The next event in the challenging venue will be the Acorn Travel Midsummer Caerwent Rally on June 16th.Words Stephen EDP 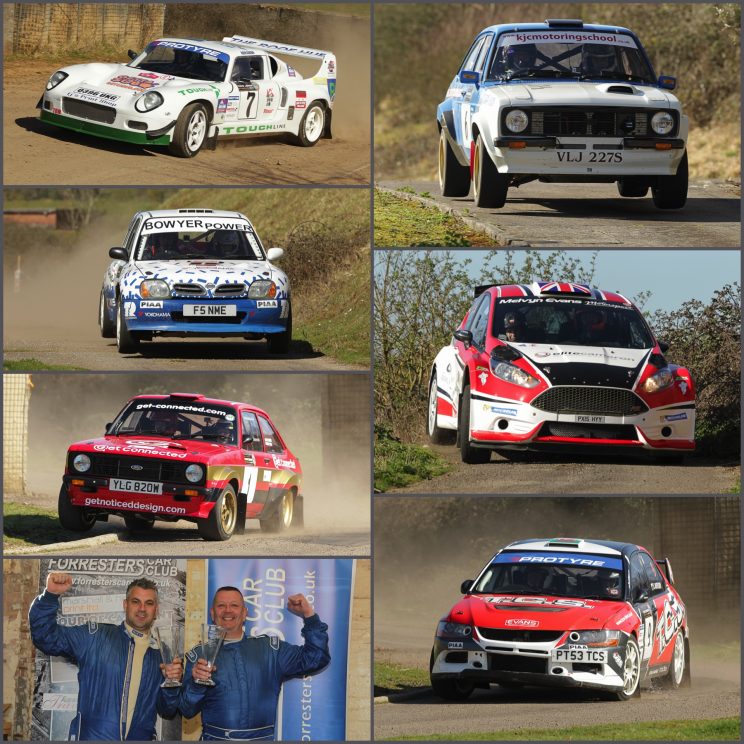