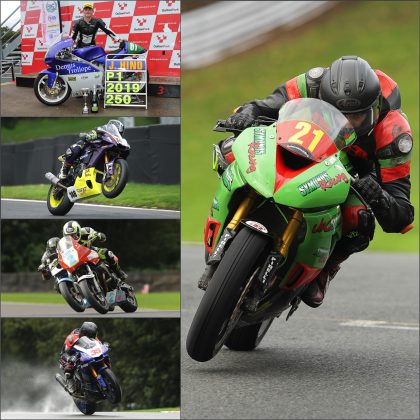 Mixed conditions greeted the North Glos riders as they headed to Oulton Park for the final meeting of the season on Saturday 28th September, heavy overnight rain and frequent showers meant that the track never fully dried out. Whilst some of the club’s championships had already been settled others were anything but including the Dunlop ACU 250GP National championship where early season leading light Jim Hind’s mid season absence due to his Isle of Man heroics had allowed Bruce Dunn to close in however pole position and a dominant win saw Hind wrap up the title in style. There was drama in the Metzeler DTR Streetstock 700 category as David Irons fell from the class lead with two laps remaining, Irons needing to win to tie with the table topping Simon Bastable who finished second behind rainmeister Adam Grosch on the day, had they finished with Irons ahead of Grosch and Bastable then the crown would have gone to Irons… Chris Oliver’s 1300 class Yamaha R1 took the overall win. 2019 newcomer Daniel Boucher capped an impressive debut season taking the Love Life and Ride Pre-Injection 1300 championship by a mere two points from a charging Jon Wright. Dan Harris sealed the Racebuykz Mini Twin title by following challenger Olii Warren home to take it by eleven points. The FPR Motul Suzuki Bandit Challenge ‘Showdown’ arrived with top two James McHardy and Harley Prebble split by 15 points and Prebble did all he could by taking both race wins but McHardy’s pair of second places and extra podium credits were enough to hand him the championship crown, the pair’s hard fought battles being one of the highlights of the 2019 season. 2019 IMS 600 champion Max Symonds showed why as he raced to a clear win in wet conditions and Max also took second overall in the Phoenix Open behind the Via Moto Kawasaki ZX-10 mounted Joe Sheldon-Shaw to earn him the Wiz ‘Performance of the Meeting’ award. Sheldon-Shaw would also take the Bluebell Lakes Powerbikes race win in the gathering gloom of the meeting closing race which also saw the last rides from Paul Dyer and Leigh Corfield before hanging up their leathers. This season’s prize winners will now head to Hatherley Manor, Gloucestershire to collect their silverware on the 23rd November to close a memorable season. words Stephen Carpenter EDP Photo News. 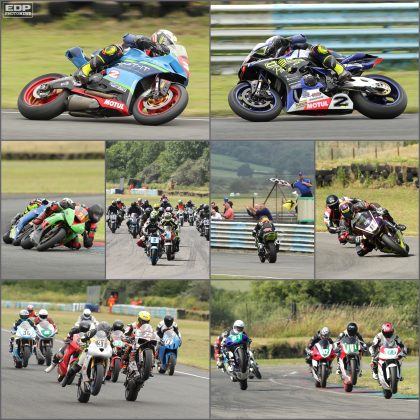 It is with an extremely heavy heart that we must inform you that due to an incident on Sunday’s Event (7th July ) one of our riders, Laura Davies (39) has passed away.
At 4.39pm, in the final Intermediate session of the day she fell from her R1 at Brooklands Hairpin, and suffered serious head injuries. She was immediately attended to by the Pembrey Medical Team and the Wales Air Ambulance summoned. She was then flown to the University Hospital of Wales in Cardiff at approx. 5.45pm.
No other rider was involved in the incident.
We, as the Phil Bevan Trackdays team wish to pass on our sincere condolences to both the immediate family and friends at such a tragic time. We would also like to thank the Medical team at Pembrey Circuit and University Hospital of Wales.

Our thoughts and prayers are with you all.

May You Rest In Peace, Laura.

The Forresters Car Club organised Acorn Travel Midsummer Caerwent rally took place on Sunday 16th June in the demanding Caerwent Military Training Area. Before proceedings got underway a minute’s silence was observed for long time club member John Bird who sadly passed away in the build up to the event, diolch John. Top seed and multiple winners in the venue Dave Willett/John Davies were quickest away to set fastest time on SS1 in their Ford Escort Mk2 by a solitary second from the Ford Fiesta R5 of James Self/Ian Davis as Thomas Cooper/Sarah Edwards’ Mitsubishi Lancer Evo IX slotted into third. The top two were reversed after SS2 with Self/Davis taking four seconds from Willett/Davis to lead by three seconds heading into SS3 when a heavy rain shower struck whilst the leading crews were tackling the stage, Self/Davis adding another ten seconds to their lead as their Fiesta R5’s superior 4wd traction told in the wet conditions. Willett/Davies hit back on SS4 taking back seven seconds to more than halve the gap to Self/Davis but alas the fight didn’t go the distance after a reported electrical issue with their Mk2 Escort sidelined Willett/Davies on SS5 leaving Self/Davis clear to take the victory after six challenging stages by 1 minute 55 seconds from the hard charging Marcus Pagett/Rhys Stoneman’s Nissan Micra ‘Kit Car’ with the Darrian T90 of Richard Merriman/Kath Curzon a further 32 seconds back in third. Seventeen Junior crews started the event in their 1000cc machines and after the six special stages Elliot Payne/Carl Williamson couldn’t be split on time from the similar Citroen C1 of Rob Wilson/Martin Haggett but a time four seconds faster on SS1 handed the victory spoils to Payne/Williamson. Completing an all Citroen C1 mounted top 3 were Ioan Lloyd/Jonathan Jackson 35 seconds down on the front two whose pace would have seen them finish in 22nd overall in the ‘senior’ event. The third and final event of 2019 in the testing venue will be the Raintite Coated Metal & Curzon Wealth Management Patriot Stages to be held on Sunday 29th September. Words Steve EDP. 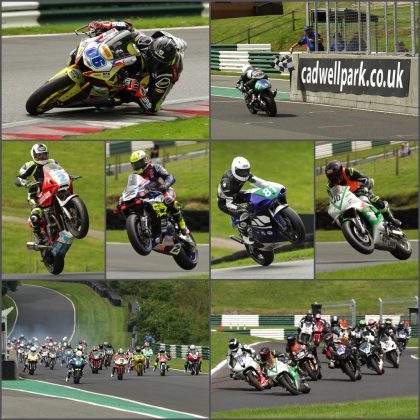 Ford Escort Mk2 crew Dave Willett/John Davies eased to a 2 minutes 20 seconds victory on the Raintite Coated Metals Patriot Stages held in the Caerwent training area on the 30th September. A blistering opening stage time put them 29 seconds clear of the field and they would build on their advantage throughout the day heading home fellow Mk2 crew Damian Cole/Steve Durbin with the Mitsubishi Lancer Evo 9 of Thomas Cooper/Ian Davis in third. The event also hosted a round of the Junior 1000 championship for drivers aged between 14 and 17 years old which saw Elliot Payne/Dom Adams take the win in their Citroen C1 by 2 minutes 8 seconds from another Citroen C1 crewed by Edward Lewis/Sam Bilham but Rob Wilson/Martin Haggett were fighting Payne/Adams hard with the pair split by just 4 seconds after SS4 before losing 2 and a half minutes on SS5. Words Steve EDP

Devizes and District Motor Club ran their annual “Valleys and Villages Classic Tour” on Sunday 5th August 2018, The Royal Wootton Bassett Mayor flagged the cars away from the Rugby Football  Club, the route was varied and included selection of interesting sites and remote driving the lanes on one of the hottest days of the year!

NG’s weekend in the Wolds
North Glos Road Racing Club paid their annual visit to the undulating Cadwell Park circuit in the Lincolnshire Wolds on 12th and 13th May for the second weekend of competition in 2018. Local lad Tom Neave returned from an arm injury to take all three Phoenix Open victories over a field which included Isle of Man TT winner Ivan Lintin but was pushed hard by 2017 champion Josh Day on Sunday with Josh setting a new outright NG lap record of 1:30.122 during race 3 in which the pair were split by just 0.04 seconds on the line! South African Phil Atkinson was another to win all three championship races in the Dymag ACU 250GP National championship but was made to work for his third win in a shortened four lap dash as he fought past Bruce Dunn and James Hind to take the lead on the last lap. Close racing abounded too in the remainder of NG’s programme of races including the 600cc bouts which had three different winners in Aaron Ridewood, Alex Baker and Joe Sheldon-Shaw and also the Black Widow Suzuki Bandit Challenge as James McHardy and Matt Baker took two wins apiece on a weekend in which heavy overnight rain on Saturday night may have dampened the ground but not the spirit of the riders! NG’s next action takes place on the Snetterton ‘200’ circuit in Norfolk on the weekend of the 2nd and 3rd June.
Words Steve EDP.
Ends.